In order to meet the privacy guidelines more easily, the pages have been released. This means that accounts no longer have to be created in order to read the contents of Kyudo.org.
If you have any questions about this site, you can contact us. You can find the contact details under "Dojo contacts".

Kyudo: the art of Japanese archery

Once one of the traditional martial arts of Japanese warriors (samurai), the bow increasingly lost its military significance when firearms were introduced in the 16th century. During the long peacetime of the Edo period (1603-1868) archery based on technical skills (kyu-jutsu) became a major spiritual exercise of the samurai, the "way of the bow" KYU DO (KYU = bow, DO = way).

The simple elegance of the movement, the beauty of the bow and the arrows and the dignity of the shooter exert a great fascination for many people.

From the outside, Kyudo just seems to be just archery. Tightening the bow and then aiming at a target resembles a skill exercise, but Kyudo is not a sport.

The technical process (the "Seven Coordinations") can be learned in a few weeks. The increasing mastery of form, its deepening and refinement into art, opens up an exciting and exciting development of one's own personality over the years. Over time, you learn mindfulness, concentration and achieve inner peace.

In our dojos Kyudo is practiced at the school "Heki-ryu Bischu Chikurin-ha" according to the teachings of the family Shibata from Kyoto / Japan.

Kyudo can equally be practiced by women and men from about eight years and without age limit. Physical strength is irrelevant to the exercise. 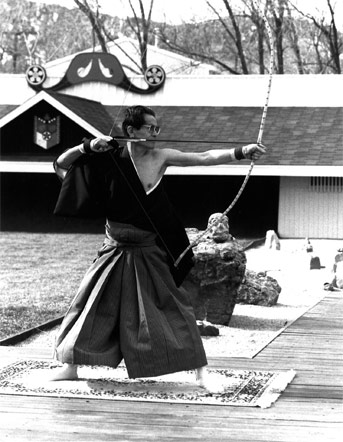 The Japanese word Oko translates as European Tiger (O = Europe, Ko = Tiger) and is the generic term for all practitioners of Heki Ryu Bishu Chikurin ha in Europe. The name was given in the early 90s by Kanjuro Shibata XX, Sendai Sensei. At that time there were relatively few scattered students in Europe. Larger groups existed at that time in Vienna, Bern and Bonn. Until the year 2016 all dojos (= practice groups) of our school were Tiger groups (group name and -ko). Kanjuro Shibata XXI, Sensei also introduced the dragon tradition (Ryu) in 2016 with the dojo Soryu.

On June 5, 2002 - meanwhile, there were a number of dojos in various cities that had received names from Sendai Sensei and were organized as independent associations - representatives of these dojos met near Marburg and decided to join together in an umbrella organization.

This is called Oko Kyudo umbrella association e.V. and is a non-profit association under German law. In this most of the European Dojos are united, which have received a name from Sendai Sensei or Kanjuro Shibata XXI, Sensei and are organized as a club.

For all dojos that are not organized as an association and therefore can not be a member of the umbrella organization and as a substitute for the many individual scattered in different countries living practitioners was founded in parallel, the association Oko Kyudojo eV, in which these practitioners can become a member and his turn as Association is member of the umbrella organization.

The central task of the umbrella organization is to promote and disseminate the kyudo of Heki Ryu Bishu Chikurin ha in Europe. This means in practice u.a. promote communication between individual dojos and coordinate dojo-wide activities. The umbrella organization coordinates and organizes the visits of Kanjuro Shibata XXI, Sensei and other experienced students and organizes the annual program in Dechen-Chöling (Buddhist center near Limoges, France). In addition, he supports local dojos in their construction. This can be done in the form of subsidies for the construction of a dojo (practice place) or, more frequently, the support with material: Yumis (Japanese bows), Yas (arrows) and Kakes (gloves).

next events from "Calendar"